On 24 July 2019, the Executive Committee (EC) of the Albanian Association of Banks (AAB), chaired by the Chairman, Silvio Pedrazzi, held a meeting with the Governor of the Bank of Albania, Gent Sejko.

This meeting, now known as the “Summer Summit”, was held in the framework of the traditional and ongoing dialogue that the EC is undertaking with the Bank of Albania. Cooperation with the supervisory authority is very important for the well-being of banking activity and the co-ordination of forces and energies in favor of the development of the banking market.

During this meeting, Mr. Pedrazzi informed the Governor about the latest developments in AAB, focusing in particular on the decision on AAB’s contribution to aiding the consequences of the earthquake in the Korça Prefecture and the approval for setting up the Credit Bureau. Appreciating the importance of this project, Governor Sejko said that the Bank of Albania will give its full support to the realization and functioning of the Credit Bureau.

Another important issue addressed during the meeting was the regulation adopted at the last meeting of the Supervisory Council, “On extrajudicial treatment of banks, borrowers in financial difficulties”, otherwise called “Tirana Approach”, which is drafted within the framework of the fulfillment of the commitments undertaken by the Bank of Albania in the Interinstitutional Plan for measures for the reduction of non-performing loans. The purpose of this regulation is to facilitate the financial recovery of long-term borrowers who have exposure to more than one bank. EC members ask questions about how this regulation will be implemented. The responses given increase the optimism about the positive effects it is expected to give in reducing non-performing loans.

Following the meeting held in May for the revival of lending in the country, Governor Sejko recognized EC members with the drafting of a concrete plan of measures aimed at improving the quantity and quality of lending. This plan of measures drafted by the Bank of Albania will be consulted with commercial banks in the country. AAB’s representatives supported the design and implementation of this plan, which could be further enriched during the discussion process.

The interest of EC members regarding domestic payment projects and settlement payments for the euro transfers from one bank to another bank, Governor Sejko responded by saying that the approval of the bill “On payment services” will bring innovation to the banking market by creating favorable conditions for the promotion of technological innovations and for enhancing competition. While the project for settlement of euro payments within the country can now be considered a matter of months.

At the end of the meeting, representatives of AAB expressed their commitment to concretization and follow-up of the projects undertaken. 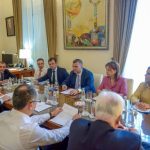 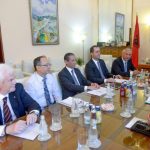 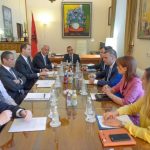