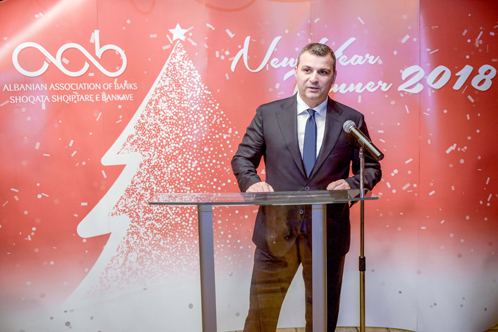 As always, it a pleasure for me to be together with banking system executives in Albania, in this annual end-of-year event organized under the auspices of the Albanian Association of Banks. In my address, I would like to briefly focus on highlights that have characterised the economic and financial developments in Albania over 2017, as well as on some of our objectives for 2018.

The Albanian economy seems to be experiencing an overall positive moment of recovery, from both the global and the regional perspective. Economic activity continued to grow reflecting the favourable financial environment, improvement of confidence, impulses generated by employment gains and the high levels of foreign direct investments, as well as the positive momentum in the economies of our trading partners.

In terms of aggregate demand, growth was driven by the expansion of private consumption and investments, and the improvement of the balance of trade with abroad, especially in the third quarter. In response to the improvement by around 10.5% of the trade deficit in goods and services, the current account deficit fell to 4.6% of the GDP in the third quarter, one of the lowest levels in the last decade. On the other hand, the fiscal stimulus is estimated to have trended downward in the third and fourth quarters, albeit budget revenues and expenditure have continued to record high growth rates.

The constant expansion of the aggregate demand has led to an increasingly higher utilisation of production capacities. The unemployment rate fell to 13.6% in the third quarter, down by 1.1 percentage points from the same quarter in the previous year. However, the gradual convergence of the economy toward its equilibrium is yet to be accompanied by upward inflationary pressures, sufficient enough for the return of inflation to target.

Our accommodative monetary policy stance has reduced the costs of financing for the private sector, has boosted crediting in the domestic currency and has contributed to the improvement of the borrowers’ financial situation. In the last months, financial markets have performed relatively calm, amid low interest rates, controlled risk premia and the exchange rate set on a stabilisation trend.

Year 2017 was positive in terms of the expansion and soundness of banking activity in Albania. A quick glance at the performance in the 10-month period corroborates this conclusion. Banking sector’s assets expanded further during the period, at 4%, in annual terms. The financial situation of the sector and activity capitalisation improved. Due to the considerable fall of loan provisioning, the financial result improved notably compared to the previous year. Also, the RoA and RoE indicators doubled at 1.6% and 16.3%, respectively, from 0.74% and 7.8%, in the previous year.

The liquidity situation appears stable, and its indicators continue to be at good levels. In annual terms, the deposits base expanded by 2.7%, reflecting a shift in the maturity structure. Against the backdrop of low interest rates, time deposits fell at 2.1%. By currency, both lek and foreign currency deposits increased by 1.4% and 3.9%, respectively.

One of the highlights of this year is the reduction of the non-performing loans ratio at 14.4%, compared with 18.23% at the end of the previous year. Now, after a relatively successfully period, the coordinated plan that we undertook together to reduce the stock of non-performing loans seems to have yielded the expected results. Therefore, in addition to the loss loans write off from the balance sheet, great results have been also achieved regarding the repayment and restructuring of non-performing loans.

A number of regulations and other bylaws have been approved by the Supervisory Council of the Bank of Albania, throughout 2017. They aim at improving the banking activity in terms of efficiency, risk management, transparency and depositors’ protection. A special moment was the establishment of the Resolution Authority in Albania and of the Resolution Fund, which will receive regular annual contributions by the baking sector.

As I mentioned above, this is a good moment, while the future still bears some questions. The economy is not exempt from this overall consideration. I take the opportunity to bring to your attention the fact that the institution each of you represents has a certain role to play in the everyday economic and financial life of the country. Now that we know the already-announced objectives of the Government of Albania for 2018, it is understandable that 2018 is a rather challenging year to further boost economic recovery and strengthen the financial stability of Albania.

From this perspective, I would like to affirm that, like in 2017, in 2018 the Bank of Albania will continue to focus on:

Concluding, I would like to reassure you that, the Bank of Albania will continue to be a serious and devoted partner.

I wish you a successful and prosperous year for you and your families.