The role and responsibilities for a sustainable future 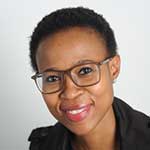 Puleng has been involved in developing the Principles for Responsible Banking, and works
with the Founding Banks and various stakeholders to drive the Principles for Responsible
Banking initiative. She started her career as a commercial law attorney. She left practice to work in the legal departments of Investec and then Standard Bank. She spent four years in Standard Bank’s Real Estate Legal department, working on property development transactions. Thereafter, she moved
to Standard Bank’s Regulatory Advocacy team, where she worked with a broad range of stakeholders on policy issues. This role involved engaging with policy makers and regulators to provide feedback and input on policies and legislation that they were developing. Puleng has obtained a Bachelor of Arts, Bachelor of Laws, and Master’s degree in Public Policy from Wits University. She is passionate about economic development, and working towards achieving the objectives of the SDGs in order to realize an equitable and sustainable future for all. 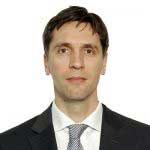 Dejan Vasiljev is the Principal Economist for financial institutions in EBRD, covering markets and transactions in Central- and South-Eastern Europe. He has a central banking background, having spent over 7 years with the National Bank of Serbia, where he headed the financial stability department. His career involves stints in the private sector, including as a head of a financial analysis department in a commercial bank and fund manager in an investment fund company. Dejan holds an M.A. in Economics from Humboldt University in
Berlin, and is CFA charter holder. 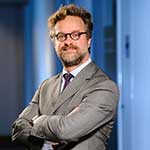 Sébastien de Brouwer is Chief Policy Officer at the European Banking Federation (EBF). He is a member of the EBF Management Committee. He is supervising all EBF policy areas as well as horizontal functions such as Legal affairs. As part of his activities, Sébastien is also Board member of the European Payment Council (EPC), Member of the Advisory Committee of fTLD Registry Services, LLC and member of various Expert Groups at EU level. He is also member of the editorial Board of the Revue de Droit Bancaire et Financier. He is a Belgian national with a Law Degree from the Catholic University of Louvain-la-Neuve and a postgraduate in International law (University of Leiden) and in Business Studies
(London School of Economics and Political Science).   Sébastien joined the EBF in 2006. Before joining the EBF, Sébastien was Head of European Affairs and Member of the Executive Committee with Febelfin, the Belgian Federation of the
financial industry (including banks) and previously legal adviser. Prior to that Sébastien also worked in an International bank (Custodian) and an Insurance Company (management of important claims)

Alessandro Bragonzi is the new EIB representative in Albania. He has been working at EIB since 2010 where it was responsible for lending operations with international financial institutions across CSEE (Austria, Czech Republic, Romania, Bulgaria, Hungary and Turkey), and, previously, in the management and establishment of EU-funded financial instruments in different EU Member States cooperating with national authorities, the EIF, the European Commission, and local financial intermediaries. Alessandro brings along an extensive and practical experience with the full set of EIB financing products and structures dedicated to sub-sovereigns, banks, and public sector operations. 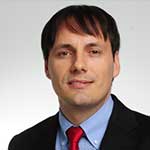 Milan is an Associate Partner in the McKinsey
Company’s Adriatic office.  He is an expert in Digital and
Distribution topics with focus on banking and insurance industry.
Milan holds an Executive MBA degree from the London Business School
and prior to McKinsey he spent  7 years as the CEO of an SME in Croatia. 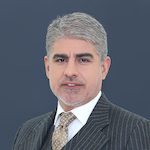 Mr Mehmet Seyhan Pencabligil has been the Chief Executive Officer and Member of the Board of Directors of Banka Kombetare Tregtare (BKT), since 2000. Under his management, the Bank has grown to be the largest bank in Albania, with US$3.9 billion in assets, US$435 million in equity, and 29 per cent market share. Mr Pencabligil also established BKT-Kosova in 2007. Mr Pencabligil is the Honorary Chairman of the National Committee of the International Chamber
of Commerce; Chairman of the Albanian Leasing Company; and Chairman of the Albanian and Turkish Chamber of Commerce and Industry. He is also an alternate Member of the Board of Directors of the World Savings Banks’ Institute (WSBI). Mr Pencabligil is the Honorary Consul of Pakistan in Albania and has been awarded with the title of “Doctor Honoris Causa” by Aleksandër Moisiu University.

Banking challenges in the Region 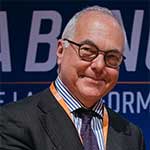 Pierfrancesco Gaggi works in Rome at Associazione Bancaria Italiana – ABI, where heads
the Unit dedicated to International Relations. Following an experience in BNL (now BNP BNL), he joined in 1985 the Research Department at ABI. In 1991 he entered the field of Payment Systems, with a specific focus on the economics and marketing of payment instruments. In the ‘90s he contributed to launch the Italian debit card scheme BANCOMAT and the Italian payment initiation scheme between banks and corporates (CBI, bank-to-business payment initiation). As from 1997, he headed the Department dedicated to Payment Systems and afterwards (2009) the Division dedicated to Payment Systems, Markets’ Infrastructures, Physical and IT Security and Technology. After a long period serving as Chair of the Payment Systems Committee of the European Banking Federation and member of the European Payments Council Plenary and Coordination Committee, in 2011, ABI appointed him as head of the International Relations Department, maintaining the role of Chairman of Consortium ABILab, the think tank of ABI on cybersecurity and innovation, and of the Association of Italian banks participating to the SWIFT community. As from 2011 he is Member of the Executive Committee of the European Banking Federation and Board Member of the European Money Markets Institute – EMMI. 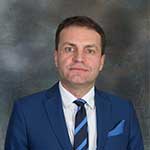 Mr Vladimir Vasić has over 15 years of professional experience in the financial and private
sectors, including the managing positions he has held in several banks, insurance companies,
as well as in an investment fund management company. He graduated from the Faculty of
Economics at the University of Belgrade, Department of Banking, Finance and Insurance, and during his professional development he attended numerous courses in both domestic and international environment on the topics of planning and strategic decision-making, credit and other risks in the operations of banks, as well as from the domain of managing projects, teams, quality, changes, etc. During his career in banking, Mr Vasić was, inter alia, professionally engaged in general business related operational support; he dealt with tasks related to coordination and control of branch office operations; he worked on strategic planning and project management; he was a member of the risk committee, a member of the due diligence team, was authorized and responsible for managing project portfolios, and dealing with key changes. In addition, he carried out activities related to operational risks and activities concerning anti money laundering and compliance, managing projects for growth of competition, performance and quality of the bank’s operations, and carried out advisory activities aimed at the strategic improvement of financial performance. 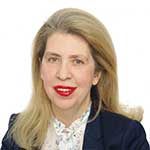 Professor Charikleia Apalagaki, born in Crete in 1959, holds, since March 2017, the position of the Secretary General of the Hellenic Bank Association. She is also full Professor in the Aristotle University of Thessaloniki since 2004, and Member of the Thessaloniki Bar Association since 1984. Professor Apalagaki joined Piraeus Bank in 2001, and hold the following positions: Management Consultant in Legal Issues, Chief Legal Counsel, Non-Executive Member of the Board of Directors, Member of the Audit Committee, Executive Member of the Board of Directors, and interim Chairperson. Her studies in law (Civil, Commercial, Banking, European Financial, and Criminal) were undertaken at the Aristotle University of Thessaloniki, where she was awarded her PhD in Civil Procedure Law. She has intensive course and longer research stay in Germany (Hannover Law Faculty) for a period of three years and she still cooperates with the German law Faculty, as well with other European Law Faculties (Erasmus teaching programs). Mrs. Apalagaki is specialized in enforcement law (and in insolvency proceedings) and has also extensive legislative drafting experience, as she was Member of two Ministry of Justice Committees on the modifications of the Code of Civil Procedure, voted into Law 4334/2015, and Rapporteur on the Ministry of Finance Committee on the introduction of the order of payment in Administrative Procedure. 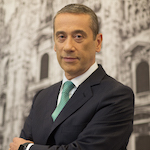 Mr. Silvio Pedrazzi has been appointed as CEO and Member of the Board of Directors of Intesa Sanpaolo Bank Albania in October 2013. Since then he has driven the profound evolution of the Bank with a particular focus on innovation and Digital Banking, while implementing all the policies and standards of Intesa Sanpaolo Group.

During this journey Intesa Sanpaolo Albania has achieved high appreciation in the Country being recognized as a frontrunner in the fields of Economic Sustainable Development, Corporate Governance as well as Corporate Social Responsibility.  Under his leadership, the Bank has developed an intensive cooperation with all the State Institutions aimed to an effective development of the most promising economic activities in Albania like Energy Sector, Tourism, IT Services as well as Agriculture. Apart of his office duties, in Albania, Mr. Pedrazzi currently serves as Chairman of the Association of Albanian Banks (AAB), Board member of AIDA (Albanian Investment Development Agency), Board Member of Confindustria Albania, member of the National Labor Council as well as National Economic Council. In the recent past he was Chairman and then Board Member of FIAA (Foreign Investors Association of Albania) and Board Member of Camera di Commercio Italo-Albanese. Mr. Pedrazzi cooperates on regular basis with the most reputable International Financial Institutions, among which, the International Monetary Fund, World Bank and European Bank for Reconstruction and Development.

Silvio Pedrazzi started working in the Banking Industry in 1978 reaching his first Top Manager position in 1996 when he was appointed Director General of Cassa di Risparmio di Spoleto Spa. Afterward, within the Banking Group, he moved to Cassa di Risparmio di Ascoli Piceno again as Director General. In 2006 Silvio Pedrazzi started his journey abroad being appointed as First Deputy Chairman of the Executive Board in Banca Intesa Beograd; in 2008 he moved to Ukraine as Chairman of the Supervisory Board in Pravex Bank. Before joining Intesa Sanpaolo Bank Albania he covered as well  the position of Area Manager (within International Subsidiary Banks Division of Intesa Sanpaolo) for Ukraine, Russian Federation and Egypt and served as Board  Member and Chairman of the Audit Committee in Bank of Alexandria. He completed his studies in Italy were he got the University Degree in Economics and a Master Degree in Economic Sciences.