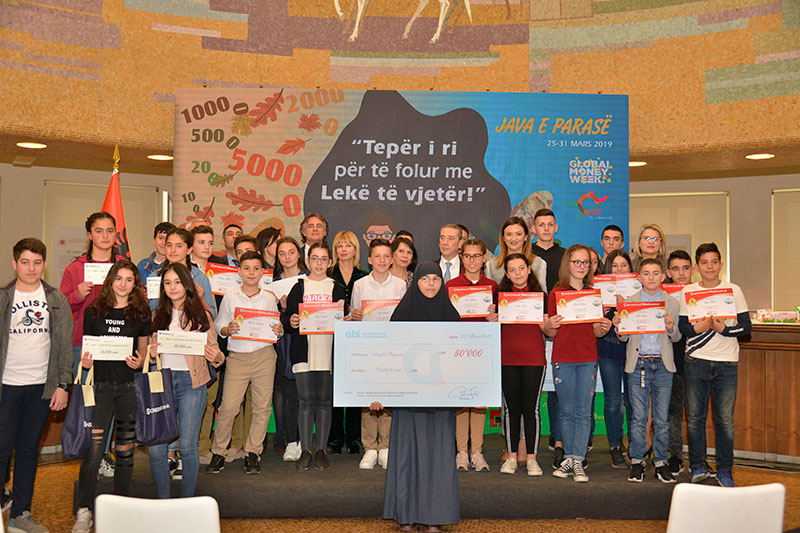 During the week of 25-31 March 2019, the Bank of Albania (BoA) and the Albanian Association
of Banks (AAB), with the support of the Ministry of Education, Sports and Youth (MASR).

Albanian Deposit Insurance Agency (ASD) and ANFE organized various activities, aiming to involve as many young people as possible, in order to raise their awareness about financial education issues.

This year’s slogan was: “Too young to speak in old lek!”
The Money Week 2019 actively involved more than 4,000 pupils and students, from more than 90 schools, at all levels.

On March 25-th , 2019, the Bank of Albania opened the Money Week. The event was greeted by Mrs. Luljeta Minxhozi, First Deputy Governor of the Bank of Albania, Mrs. Lorena Haxhiu, Deputy Minister of Education, Sports and Youth, and Mr. Silvio Pedrazzi, Chairman of the Albanian Association of Banks. After the speeches, the event continued with distribution of prizes for the contest winners, launched a month ago by BoA and AAB.
The first contest, organized this week, was themed: “Learn. Save. Earn”, and was supported by
the Banka Kombëtare Tregtare (BKT). The contest was attended by pupils of the 6 th grade of the 9-year schools.

The second contest was the one with photomontages, with the subject: “Too young to speak in old lek: one “0” more makes the difference”, which was attended by 9-th grade students of the 9-year schools. The contest was supported by Credins Bank.

The third contest was the one for the best video. Gymnasium students were invited to convey their original messages about the topic: “Too young to speak with old lek”, and the prizes were supported by the American Bank of Investments. The best essay contest themed: “Lek Re-denomination: A Socio-Linguistic View on a 55-Year
Error” (Language and Literature Branch) and “Re-denominations: Examples from History and
the Albanian Case” (Finance – Bank Branch), supported by Intesa Sanpaolo Bank Albania.

“Education of Young Employers in the Banking Sector” program
Partners Albania, in cooperation with the Albanian Association of Banks, AAB, announced the opening of a training program for young jobseekers, for the academic year 2019-2020, by organizing informative sessions at universities.

Visit to the BoA Museum and presentation on the topic: “Too young to talk with old Lek”
On the occasion of Money Week 2019, pupils of the 2-nd grade of “Vatra e Dijes” school visited
the Bank of Albania Museum. During the visit, pupils were also introduced to the theme: “Too
young to speak in old lek”.

Likewise, Hotel-Tourism high school students visited the Bank of Albania Museum, where they
got acquainted with the numismatic collection, the country’s economic and monetary history, and
the theme: “Too young to speak with old lek”.

Visit to the BoA Museum and lessons with the theme: “Too Young to Speak in Old Lek”
Pupils of the “Don Bosko”  9-year non-public school visited the Bank of Albania Museum. The
children were introduced to the numismatic collection and visited the museum’s premises,
dedicated to the financial education of the young generation.

Visit to the BoA Museum
On the third day of Money Week, pupils of “Udha e Shkronjave” 9-year non-public school,
visited the Bank of Albania Museum.

“International Trade Game”
Junior Achievement organized three one-day regional camps in Elbasan, Tirana and Durrës,
where more than 90 schools were represented, with more than 100 pupils in total. International
Trade Game is an educational format, where pupils are organized in groups and are placed in the
position of states and operate in international markets.

On March 28-nd , 2019, the Albanian Association of Banks (AAB), in cooperation with the Bank of Albania and with the support of Ministry of Education, Sports and Youth (MASR), organized for the second consecutive year the European Money Quiz, with the participation of some 350 pupils of 9-year schools, from all over the country. Participants attended a team-based organized contest, through Kahoot! online platform.

Children, between 13 and 15 year-old, from 59 9-year schools participated in this contest, which
is a new initiative to test their financial knowledge. The winning team was from “Emin Duraku” 9-year school in Tirana and was comprised of: Almira Tota and Hana Spahia. The winners will represent Albania in the European final, where 30 countries will compete. The contest will take place on May 7-nd , in Brussels. In addition, the Bank of Albania granted symbolic gifts to the winners.

At the end of the Money Week, Mr. Gent Sejko, Governor of Bank of Albania, delivered an open lecture at “Aleksandër Moisiu” University, Durrës, with the topic: “The role of the Bank of Albania in the sustainable and log-term development of the country – financial stability an indispensable precondition for economic development”.

Innovative Talk: “From an Application for Personal Finance to Business”
On the occasion of the Money Week, Mr. Perjan Duro delivered the presentation: “Personal
Finances: Life of a Financial Application”, at the premises of the Bank of Albania..

As the creator of MoneyCoach application, Mr. Perjan Duro introduced the process of creating the application, in order to promote innovative ideas, in the function of financial education and financial inclusion. This application can be downloaded free of charge to Apple and the Play Store to help manage your personal finances.