The competition “If we were bankers” with students of three economic faculties from Tirana Business University (TBU), Luarasi University and University of Tirana, organized in collaboration with Youth Centre of Tirana and aimed at understanding banking and its daily operations, from a practical prospective. Three teams competed with each other, by representing themselves as bankers and offering to the client (a Hydro Power plant company) the best financial offer. All students were initially advised from AAB, BoA and Banka Kombëtare Tregtare representatives, about the case study and the competition’s characteristics. The TBU team was the winner of the competition. More than 85 students attended the event. 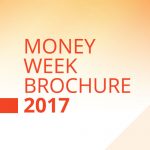